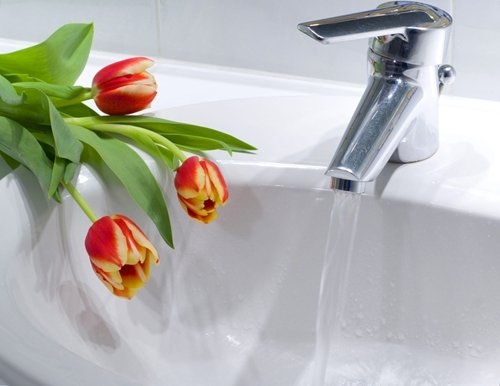 While overall home improvement spending is expected to increase this year, a new survey reveals homeowners are focusing their efforts and their money on kitchens and bathrooms. The quarterly study conducted by the American Institute of Architects found that Americans want to increase the size and the number of both rooms in their homes.

"Kitchens have reclaimed their place as the true focal point of the home, with a growing emphasis on utilizing more technology," said AIA chief economist Kermit Baker. "There has also been renewed interest in integrating more household activities into this space."

While many people install items aimed at increasing the comfort and efficiency of their kitchens by adding features such as electric radiant heating, large islands and energy-efficient appliances, the AIA survey found other things are important as well.

Bathroom features
The accessibility and safety afforded through universal design elements were also found to be important in bathrooms.

"Along with a continued need for accessibility within bathrooms, the majority of products that are extremely popular promote energy-efficiency and sustainability, such as LED lighting and water saving toilets," said Baker.

Doorless showers, which are popular for their esthetics as well as their accessibility, were in-demand by more than half of those surveyed.

Homeowners are also interested in luxury and comfort when it comes to a bathroom renovation project. One-third wanted to incorporate warm floors into their bathrooms by installing radiant heat. Additionally, 21 percent said they wanted to include a specialty upscale shower in their bathroom plans.

Is it worth it?
Kitchens and bathrooms are traditionally in-demand when it comes to renovation projects. Not only are both of these rooms used often by those who live in the homes as well as their guests, updating them can add to the overall value of the home.

Remodeling Magazine's annual Cost versus Value report estimates that homeowners who complete a minor kitchen remodel can expect a 75 percent return on their investment, while those who do a major kitchen renovation can expect to recoup 68 percent of the cost of the project.

Bathroom remodels are also cost-effective, according to the report. American homeowners can expect about a 65 percent ROI for a midrange bathroom remodel.

Did you find this post helpful? Let us know by giving it some applause.
Tagged:
Radiant-news, Kitchen-remodeling, Bathroom-remodeling, Indoor-heating, Radiant-floor-heating, Remodeling
Join the Discussion
Quick Access Links Indoor Heating Blog
Related Posts
How Much Does Radiant Floor Heating Cost in 2022?
Winterize Your Garage/Driveway with WarmlyYours Radiant Heating
Answering Some of Electric Floor Heating’s Most Frequently Asked Questions (FAQs)
Like this post? Subscribe for regular updates
Make sure you don’t miss out on the latest news in radiant heating by subscribing to our blog. We’ll send you an email with links to the newest posts from WarmlyYours. We won’t share your information and you can unsubscribe at any time with a single click.
Previous Post Selling Radiant Floor Heating
Next Post Comfort And Color Make A Child's Room A Great Place To Hang Out