An Easy Installation Even For Me - the Mechanically Challenged! 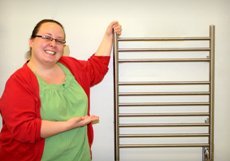 This week I decided that I would try to install a WarmlyYours product entirely by myself. We talk a lot about how easy our products are to install, so I decided that it was time for me to put it to the test. My thinking was that if I can figure out how to do this on my own, surely anyone could.

Let me tell you a little bit about my background. I’m female (not that they aren’t very capable, mechanically inclined women out there, I’m just not one of them) and I was busy taking dance lessons as a kid – I wasn’t helping my Dad fix things out in the garage. Even now, when the DVD player is on the fritz, I call my husband in to deal with it. Patience is NOT one of my virtues!

Anyways, back to the point. I decided to start with a towel warmer because it seemed like the least complicated product to install. And, I’m happy to say, it went smoothly. Here’s how it all went down.

Step 2 - Then, I used the template to figure out where to mark the wall so that I could hang the towel warmer (for me this was easy since I did it on a practice wall at our office). There are only a couple very important rules. First, at least 2 of the 4 brackets must be installed in a stud. Secondly, for the plug-in model only, it must be installed no more than 6 feet away from a grounded outlet or the plug won’t reach.

Step 4 - I attached the towel warmer to the brackets.

Step 5 - I didn’t actually perform the final step which was the electrical hookup because it actually requires an electrician, but I did set everything up for that step.

Voila, done! This exercise was a little confusing for a novice such as me, but overall it was pretty easy. Next project, a fusion reactor!

Did you find this post helpful? Let us know by giving it some applause.
Tagged:
Towel-warmers, External-reviews, Warmlyyours-blog, Indoor-heating, Installation
Comments

Thank you for your instructions on how to install your towel rack. It is nice to know that it is easy enough for a regular person to install. When you are married to a contractor they make it look easy, but then when you go and try to do it, it usually isn't.

Karla Dawson April 26, 2011
Join the Discussion
Quick Access Links Towel Warmers Blog
Related Posts
How Much Does Radiant Floor Heating Cost in 2022?
Winterize Your Garage/Driveway with WarmlyYours Radiant Heating
Answering Some of Electric Floor Heating’s Most Frequently Asked Questions (FAQs)
Like this post? Subscribe for regular updates
Make sure you don’t miss out on the latest news in radiant heating by subscribing to our blog. We’ll send you an email with links to the newest posts from WarmlyYours. We won’t share your information and you can unsubscribe at any time with a single click.
Previous Post The Infinity – A New Mid-Priced Towel Warmer from WarmlyYours!
Next Post Project "Kitchen Installation"