Why is Everyone Remodeling? The Cause May Surprise You

Every metric for monitoring remodeling activity indicates that it's on the rise, but why?

Home remodeling spending is expected to increase 8.6 percent by the end of this year before accelerating even further to 9.7 percent by the first quarter of 2017, according to the Leading Indicator of Remodeling Activity (LIRA) released by the Remodeling Futures Program at the Joint Center for Housing Studies of Harvard University. So where is all of this spending coming from? In short: baby boomers.

Baby boomers are spending an average of $73,300 on home renovations, which is triple the amount that millennials (between the ages of 25 and 34) are spending. And the reason they’re doing so might surprise you.

We’ve heard a lot about “aging in place,” which results in remodeling a home in order to make it easier to live in as the homeowner ages. This includes things like walk-in showers and counter-height microwaves. You might expect this kind of remodeling to be a driver for baby boomers to remodel their homes now; however, the main reason they — and homeowners of all ages — have decided to renovate is actually because they finally have the time and money to do so.

This may indicate that homeowners are finally comfortable enough with the economy and the housing market to invest in their homes. However, the rise of the housing market is also driving more people to renovate rather than buy a new home.

“Ongoing gains in home prices and sales are encouraging more homeowners to pursue larger-scale improvement projects this year compared to last with permitted projects climbing at a good pace,” said Chris Herbert, Managing Director of the Joint Center. “On the strength of these gains, the level of annual spending for remodeling and repairs is expected to reach nearly $325 billion nationally by early next year.” 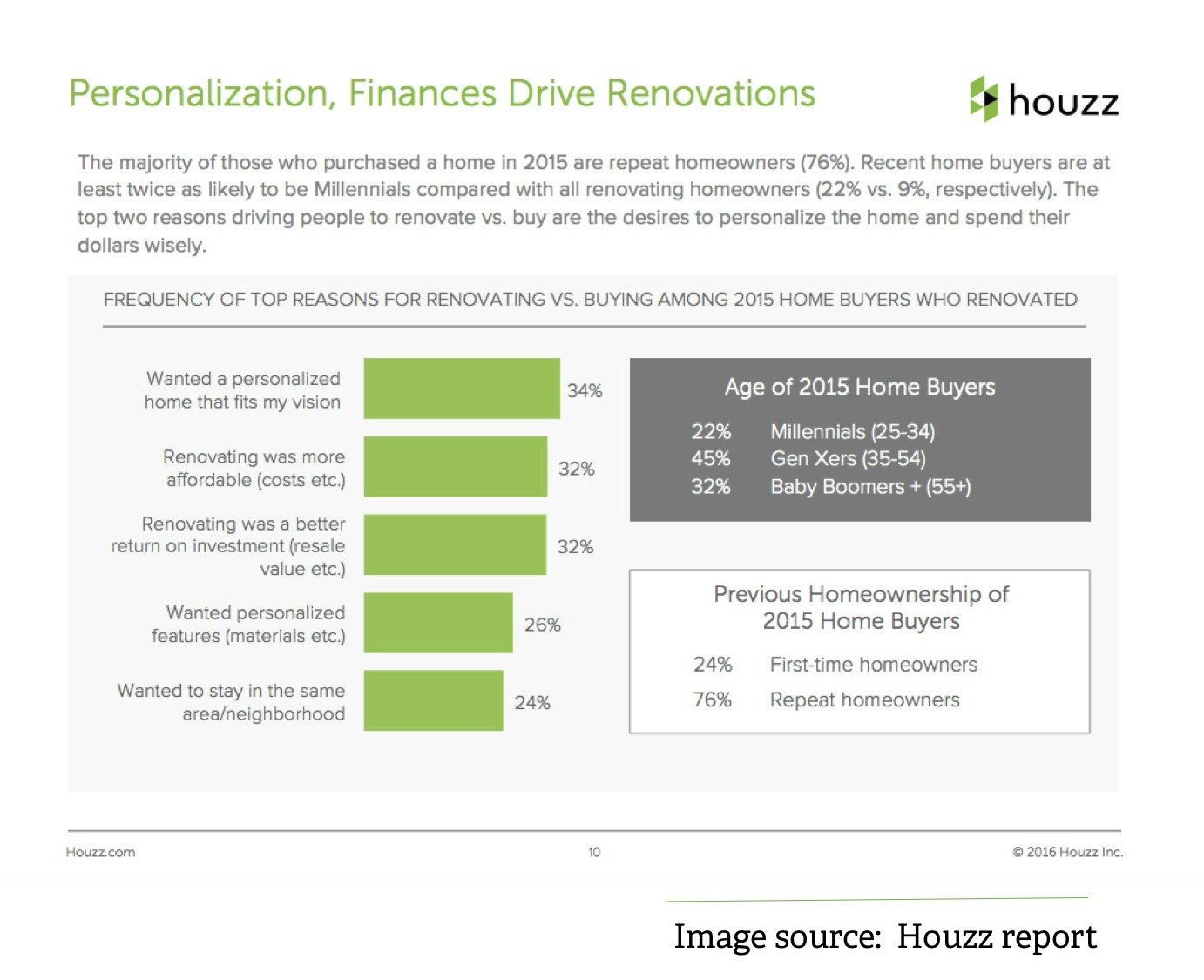 Homeowners realize they can usually get a better return on their investment if they update their home instead of buying new. According to the Houzz & Home survey, 32 percent of respondents believe that renovation is more affordable than buying a new home. Even more so, 34 percent chose to remodel instead of move so that they could personalize the home. This particularly applies to millennials, who are nearly twice as likely as boomers to find renovating more affordable or a better return on investment, according to the survey. And although they make up a smaller piece of the homeowner-pie, millennials are just as likely to renovate their homes as other generations.

In general, most homeowners are putting their renovation dollars into an updated kitchen, bathroom or living room, the survey notes.

More than half of Houzz homeowners plan to start or continue renovations in 2016, with more than 80 percent of them planning to hire a professional for their projects. Whether you’re a homeowner or professional, there is plenty of work to be done this year!

For more information about the 2016 Houzz & Home report, visit http://info.houzz.com/HH2016.html.

Did you find this post helpful? Let us know by giving it some applause.
Tagged:
2016, Remodeling, Warmlyyours-blog, All-radiant-news, Home-remodeling, Indoor-heating
Join the Discussion
Quick Access Links Remodeling Blog
Related Posts
Up, Up, and Away: WarmlyYours Turns Remodeling Market into Jet Fuel
These 1 Hour Remodeling Projects Will Rock Your Home Decor
Houzz: The 1 Tool Every Aspiring Remodeler Should Know About
Like this post? Subscribe for regular updates
Make sure you don’t miss out on the latest news in radiant heating by subscribing to our blog. We’ll send you an email with links to the newest posts from WarmlyYours. We won’t share your information and you can unsubscribe at any time with a single click.
Previous Post WarmlyYours 2015 Second Quarter Industry Report
Next Post How to Prevent Your Tile Floor from Cracking