In 2013, growth in the radiant heating industry continued to gain steam, especially in the second half of the year. Strength in this area was due in part to stabilization and the beginning of positive growth in the housing and remodeling markets. The National Association of Realtors (NAR) reported in its December REALTORS® Confidence Index1, that as 2013 ended, 89% of realtors surveyed saw home prices continued to rise. The majority of respondents, 92%, expected home prices to continue on that growth trend, though at a more modest pace, in 2014.

In its fourth-quarter Remodeling Business Pulse (RBP) survey2, the National Association of the Remodeling Industry (NARI) reports that growth in the industry continues to be strong with remodelers confident that business conditions will remain positive going into 2014. Survey data attributes the strong growth in 2013, and anticipated continued strength into 2014, to consumer confidence, leading to an increased willingness by homeowners to spend money on home remodeling projects. Additional factors contributing to the strength in the market included homeowners starting renovations that had been postponed, improving home prices, and overall economic growth. Both the National Association of REALTORS® and NARI anticipate growth will continue at a steady rate into 2014.

Business has been good in the radiant heating industry. While 2013 started with modest growth, the market picked up steam in the third and fourth quarters.

Analysis of gross sales on a state-by-state (or province) basis reveals the top five states for WarmlyYours floor heating sales in 2013 were, in descending order, Ontario, California, Illinois, New York, and Pennsylvania, as compared to the top five ranking in 2012, Ontario, California, New York, Illinois, and Pennsylvania. Illinois jumped ahead of New York by posting the greatest year-over-year percentage gain of all states at 26.3%.

In terms of the top states/provinces in quoting orders for 2013, New York led the way, followed by Illinois, California, Ontario, and Pennsylvania. In 2012, the quoting leaders were Illinois, New York, California, Pennsylvania, and Ontario—again the same five top-performing states jostling for position. The Ohio market shows strong promise, coming in at sixth place, with the greatest increase in quotes, 39%, over 2012. 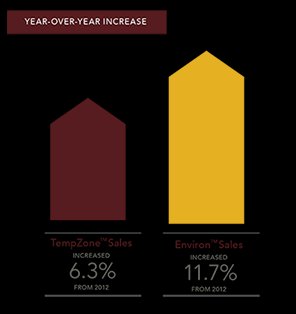 The floor heating category, including all products in our TempZone™ and Environ™ product lines, comprised 79% of all 2013 sales, leading sales of all other categories with a 7.7% increase over floor heating sales in 2012.

Our TempZone™ line, which includes the TempZone™ Custom Mats, Easy Mats, Flex Rolls, Shower Mats and Standard Mats, continues to be the strongest seller, comprising 81% of gross sales within the floor heating category. The TempZone™ line demonstrated a year-over-year increase in sales of 6.3%. Sales are heating up with the Environ™ product line (including Environ™ Easy Mats and Flex Rolls), which makes up 19% of floor heating sales (up from 11% of the category in 2012) and demonstrated a gross sales increase of 11.7% over 2012. 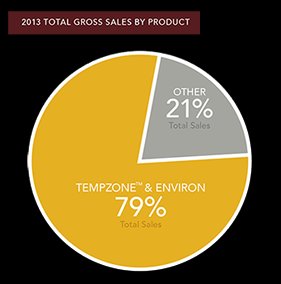 WarmlyYours sales data indicate that floor heating rolls are still the most popular choice for most consumers. In addition to this perennial favorite, there is a growing interest for other floor heating options including loose cable, an alternative for rooms of unusual size or shape or for installers who prefer the freedom of working with free-form cable. Research into the European market found that installers are evenly split on their preference for loose cable vs. cable affixed to mesh rolls and mats. WarmlyYours predicts that the U.S. market will follow a similar pattern, as we have already seen an increase in requests for a loose cable product from veteran installers.

According to Scott Rosenbaum, Manager, Technical Support and Engineering, proper testing in the field is the biggest challenge for installers. Our technical support team continues to provide guidance on this and other issues. The availability of 24/7 installation and technical support remains an essential need for installers in the radiant heating industry.

To further address the need for better testing in the field, the WarmlyYours engineering team is working on an innovative new product that will make it easier for installers to test the products before, during, and after installation to ensure proper installation and operation of the floor heating system and compliance with warranty specifications. We expect this new product to become available to our customers later this year.

WarmlyYours has a number of new products in the pipeline scheduled for release in 2014. The new WarmlyYours FeelsWarm® Countertop Heaters were launched in January. These adhesive-backed heating elements are available for custom order and in standard sizes to gently add warmth to natural and man-made stone countertops. Our next product announcement is expected in early February, with several more products across product categories currently in the development pipeline for introduction later this year.

WarmlyYours expects to see continued strength in the market in the coming year. Following industry expectations for home sales, construction, and remodeling markets to continue steady growth, WarmlyYours and the radiant heating industry as a whole are projected to see incremental growth in 2014. In addition to overall growth across categories due to the recovering construction market, snow melting and deicing products deserve special notice. Due to the unusually heavy snowfall and extreme cold experienced by much of the U.S. this winter, we are predicting an increase in sales of snow melting and roof deicing systems as winter-weary homeowners seek better options for managing snow and ice removal.

Did you find this post helpful? Let us know by giving it some applause.
Tagged:
Press-industry-report
Join the Discussion
Quick Access Links Press Industry Report Blog
Related Posts
How Much Does Radiant Floor Heating Cost in 2022?
Winterize Your Garage/Driveway with WarmlyYours Radiant Heating
Answering Some of Electric Floor Heating’s Most Frequently Asked Questions (FAQs)
Like this post? Subscribe for regular updates
Make sure you don’t miss out on the latest news in radiant heating by subscribing to our blog. We’ll send you an email with links to the newest posts from WarmlyYours. We won’t share your information and you can unsubscribe at any time with a single click.
Previous Post Go Red and Radiate Awareness
Next Post 4 Free Ways to Gather Customer Feedback on New Products